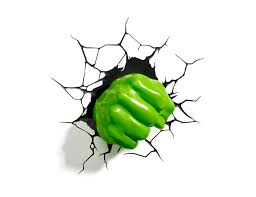 You wouldn’t know it to look at us, but my family and I are huge comic book fans.  We love all things comics including movies, graphic novels, ComicCon, etc.  We haven’t actually been to a ComicCon Convention, but we have a library of comic books and animated films.  Plus, I have been known to dress up like Harley for a Halloween or two (okay maybe more than two).

Our family’s formal introduction to comics began when I married my husband.  I had always been a casual comic reader, but my husband had grown up as a collector.  Central to his collection was his Hulk comic books.  I for one love the Hulk.  For those unfamiliar with the Hulk, the Hulk is actually a man named Dr. Bruce Banner. Dr. Bruce Banner was a brilliant military scientist.  He was a think wisp of a man with a very mild-mannered disposition.

Bruce’s upbringing was far from ideal.  According to the Marvel database Bruce grew up in a home where he was loved immensely by his mother but despised by his father.  Bruce’s father Dr. Brian Banner’s disdain from his son was a result of his own broken childhood coupled with jealousy about the amount of affection Bruce received from his mother, Brian’s wife, Rebecca.  This was made worse by Brian’s alcoholism and his unsubstantiated fear that his work with radiation had mutated Bruce’s DNA.

As a child Bruce was physically abused by his father.  He had limited family support with the exception of his maternal cousin, Jenifer Walters.  To cope with the abuse, he retreated into his books. Bruce’s life shifted dramatically when his father killed his mother and was institutionalized.  After the death of his father he was raised in the care of his paternal aunt, who raised him in a loving household.

Banner grew up to be a shy, somewhat awkward, but intellectually gifted adult.  He graduated with a doctorate in Nuclear Physics and took a job as a nuclear physicist on a military base.  It was on this base the 7-foot behemoth known Hulk was born.  The Hulk was the byproduct of Banner getting caught in a Gamma Ray explosion while trying to rescue a teenager name Rick Jones.

The Hulk, Banner’s alter ego, is the polar opposite of Banner.  Where Banner is small, mild mannered, and brilliant, the Hulk is a giant, angry monster who is driven by emotion.  Where Banner is extremely controlled, the Hulk represents a complete lack of control.

So, you are probably wondering what this has to do with anger and anger management.

Some fans and psychologists have suggested that the Hulk is a representation of Banner’s suppressed anger. There could be number of reasons for this.  He may have felt that growing up in an abuse household didn’t allow for a safe place to express his anger since his abuser was bigger and more powerful than him.  He may have repressed his anger because he was fearful of losing control or becoming like his abuser.  It’s also possible witnessing destructive anger may send mixed messages about when and where anger is appropriate.

For the purposes of this post, I’m going to refer to losing control of anger as Hulking Out.

What does it mean to Hulk Out?

The term Hulking Out as I am using it refers to expressing destructive anger and the inability to manage anger.

How do you know when you are in danger of Hulking Out?

Below are some indications that you may be Hulking Out.  You do not have to have all the signs listed below to Hulk Out.  Hulking Out looks different for everyone.

What’s Wrong with Hulking Out?

What Causes Us to Hulk Out?

As I mentioned in my post titled, It’s All About Survival.  Our bodies are wired for survival.  Fight, flight, or freeze is the body’s automatic response to a perceived threat.  It is an adaptive survival response, alerting us to danger and preparing us to respond to threats.  We can’t always control the way our body responds. Our body responds in the way it thinks is best to survive the encounter.  What may present as anger, might actually be a fear response.  In the case of the Hulk, his anger gets triggered whenever he feels like he is being threatened.

How do I keep from Hulking Out?

Is All Anger Bad?

Dr. Banner is genetically predisposed to become the Hulk.   For the rest of us how we express our anger is a choice.

Check out these articles: